It's Remembrance Day, or Armistice Day, here in the UK and in many countries around the world soon.  I've worn a poppy on this day, and the days leading up to it, for as long as I can remember.  I have very clear memories of the 'Poppy Tray' being brought around the classes when I was at Primary School and today exactly the same thing still happens.  I am thankful for the men and women who have and still do fight for the world to be a better place.  I wear my poppy with pride and thankfulness.

The two biggest UK charities are Poppy Scotland and The British Legion.  Here's their stories:

The British Legion's Story of the Poppy

The poem Flanders Fields by John McCrae is pretty much the accepted origin of wearing a poppy.

I was asked to make some crochet poppies by my friends at work.  I'm just going to take them into work for whoever wants one and they can put their own donation in the charity box: there are plenty around, thanks to all the volunteers. 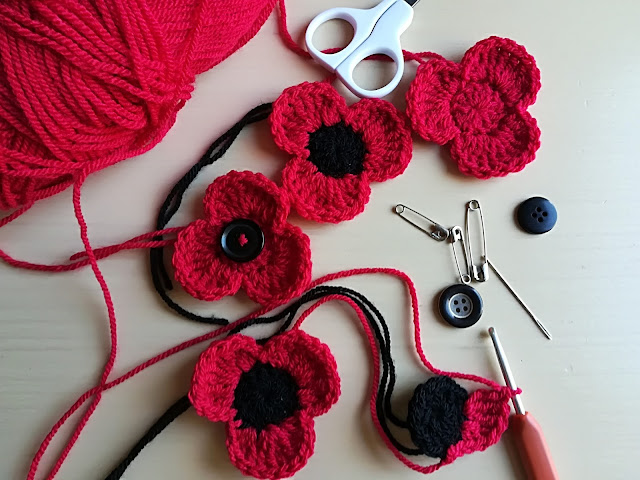 There are only two rounds to this pattern, making it super quick to work up.  I've gone for a three petal poppy.  It looks good just in red yarn with a black button in the centre, but I must admit I prefer it with a black middle.


Using dk yarn and a 4mm hook.
This pattern uses US crochet terms.


Begin with magic circle, ch 2 (doesn't count as a dc) and 12 dc into the circle and slip stitch to the first dc. to complete the circle.  Pull gently on the yarn tail to close the magic circle (12)


If you did this round in black break yarn and slip stich your red yarn into any of the dc stitches.  If you're doing the whole poppy red, then just carry on!


Round 2
*hdc, dc and trc into first stitch, 5 trc into next stitch, then trc, dc and hdc into third stitch, sl st into fourth* repeat twice.
Done!

Sew your ends in and add button, if you like, put a safety pin at the back and you're good to go.


If you're feeling fancy you can double layer the poppy AND add a button: 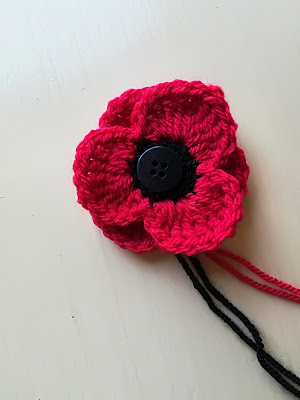 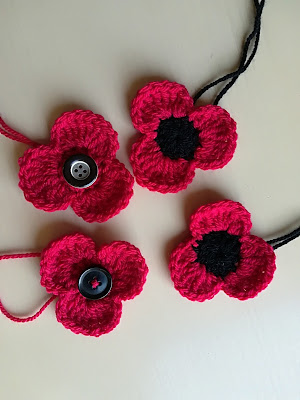 With a button for the all red version.
Excuse my ends not sewn in...I've not sewed the safety pins on the back yet!